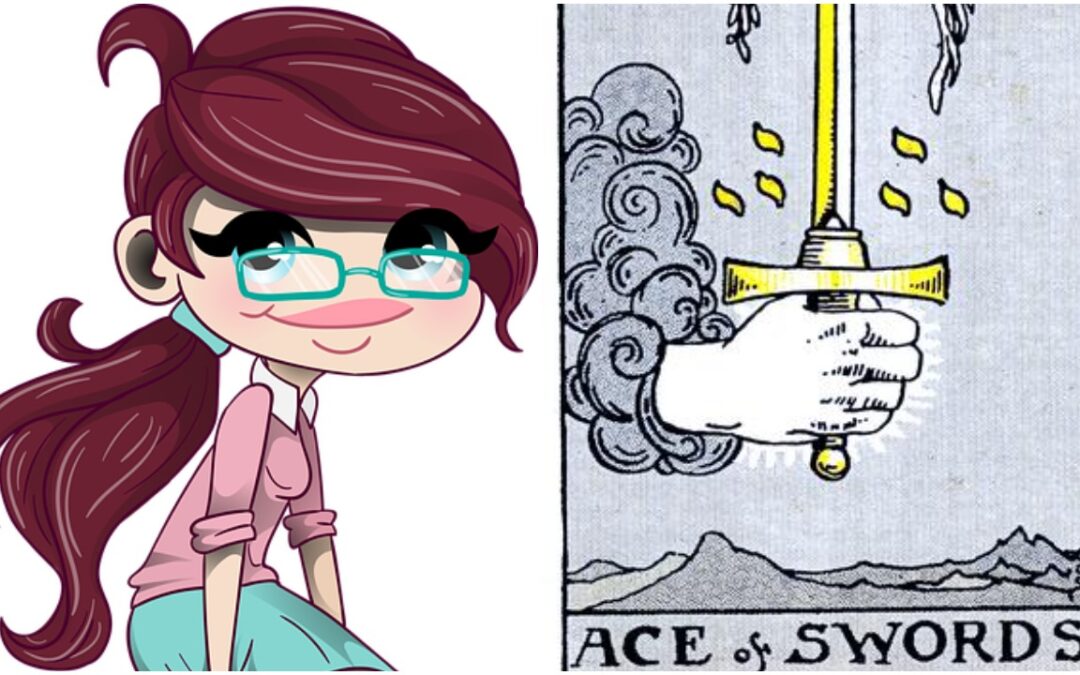 After learning about how you can add a touch to a character’s personality, indicated by the Major Arcana of the tarot, you can make your character’s personality even more intriguing. Last week I talked about how you can add different traits to the characters in a novel or any creative writing piece using the cards in the Wands suit of the tarot. However, this time, I am going to go over the Swords suit of the Minor Arcana.

The Swords suit in the Minor Arcana of the tarot is the one that rules your mind, your thoughts, your intellect, as well as everyday struggles. The suit is linked to the air element, which is all about communication, thinking, and your mind. I will go over how you can use traits to your characters in your creative writing piece depicted by the cards in the Swords suit. I will go over an example of how that works with a Major Arcana card a little later. Let’s start with the Ace of Swords.

The Ace of Swords (or Ace of Wind in the Penguin tarot) has anything to do with mental breakthroughs, clarity, and having a breakthrough from having a new way of thinking. It can also represent surgeries, curiosity, as well as intellectual energies. You can have a brilliant character, or maybe one that discovered an essential breakthrough relevant to your story due to their academic and curious nature. You can always create a character who loves to learn. That trait can be fitting to a character seen as a geek!

The Two of Swords is all about having to make a tough decision, where you are damned if you do and damned if you don’t. You have to weigh the pros and cons while making a decision heavily. How does this fit with a character? It is easy as you can write into the story that a character may be the way they are depicted by the card represented by Major Arcana because of having to make a difficult decision in the past. Perhaps you can write in the story that the character is constantly stressed from knowing they have to make a hard decision, making them snappy, uptight, and sensitive.

The Three of Swords is the sadness and heartbreak card. It is a card that represents emotional pain, heartache, grief, sadness, and sorrow. You can either create a character that has a mean tongue and can hurt someone’s feelings regardless of the nature depicted by Major Arcana. Or, you can create a character who struggles with depression. If you go down that direction, be careful about writing in characters with any mental illness by educating yourself about them.

The Four of Swords is a card that rules rest, recovery, and needing to rest after dealing with some hardship. It can be a tarot card that represents sleep and contemplation, as well as meditation. You can add that the character in your story loves to sleep or deals with chronic fatigue, and perhaps they need to recover after fighting an illness or getting into an accident. The character can also seem sleepy by nature.

The Five of Swords is the tarot card that rules conflict and feeling defeated after a battle, whether you win it or not. It is not hard to develop a character who enjoys debates and disputes that leave the other person drained and exhausted. Perhaps the individual can be a conspiracy theorist and will not hesitate to debate with someone else, making them feel like they have nothing valuable to say.

The Six of Swords is a tarot card representing having to leave something behind, which can be emotional baggage or anything else that no longer serves you. That is the card that also represents travel on water, and you can create a character with plenty of emotional baggage that they are either working on letting go of or are struggling to remove. Perhaps they have a chip on their shoulder for that reason. Maybe the individual likes to escape to a lake or a pond because it is comforting to them. Perhaps you can make the character the type to enjoy cruises.

The Seven of Swords is the card that represents dishonesty, trickery, manipulation, dishonestly getting the upper hand, and deception. It is effortless to create a character based on this tarot card as you can make someone who cheats, backstab, and manipulates others to get what they want. A backstabbing friend, a liar, or a cheating spouse is the perfect depiction of this character type.

The Eight of Swords is the card that represents negative thinking, being trapped in your own thoughts, and thinking that there is no way out of a bad situation where that is false in reality. Therefore, the character that this tarot card can represent would be someone who has a victim mentality and thinks that they cannot get out of a bad situation.

The Nine of Swords is the nightmare card representing anxiety keeping you up at night, dreaming of the worst-case scenarios, and allowing negative thoughts to take over. You can create a character that struggles with anxiety; however, go back to the Three of Swords point about being cautious if you plan to write a character that has a mental illness. Maybe you can cause them to be the type to have anxious and worrisome thoughts if you don’t want to add a mental illness to them.

The Ten of Swords is all about a painful ending, a loss, and betrayal. The card represents anything that is over. How do you describe this type of person? Someone who is on the line of Seven of Swords. Someone who painfully betrayed someone and has this nature to them. Perhaps a part of their personality died when they experienced a loss as well. That can be a possibility.

The Page of Swords needs to gain new knowledge, be curious, and have a new idea emerge. It can be someone who enjoys communicating. You can create a character who is a perpetual scholar or someone who likes learning new languages, perhaps a writer or a broadcaster.

The Queen of Swords is about independence, seeking truth, being objective, keeping emotions out of everything, and being open and honest. The Queen of Swords also does not put up with bullshit and does not beat around the bush. She expects the same from others! You can create a character that has those attributes.

The King of Swords is the type to be logical, bring out direct communication, give the truth and nothing but the truth, and has the courage to go after what they want. The King also knows how to keep emotions in check after learning about unpleasant truths. You can create a character who has these attributes.

Here is an example: you can create a character that depicts Temperance, someone who comes off as spiritual, patient, and knows how to keep things in moderation. You can imagine someone calming and pleasant to be around, but when you place the Seven of Swords to this character, they have a sneaky, backstabbing, and conniving side to them. That is the kind of thing you do when you add a Minor Arcana card to the Major Arcana type. The next focus will be the Cups suit in the Minor Arcana.