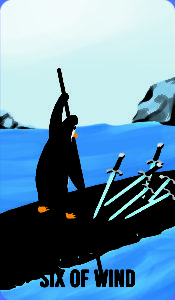 When the Six of Swords (Six of Wind in the Penguin tarot deck) shows up, it is indicative of you leaving behind something that is no longer serving you. However, you need to move forward despite the fact that you have emotional ties to what you are leaving behind. You are removing old baggage. This can represent grief and sadness as you make the transition. You are saying ’goodbye’. And this card can also simply represent travel on water.

This card is relevant to you having to look for another job because the one that you have is either going to lay you off due to poor business or you aren’t being treated well. But despite that, you have emotional ties to this job you have even though you know you have to leave. The same goes for when you need to move and change residency for any reason. Whether you have to relocate due to accepting a job opportunity elsewhere or you no longer can stay in your neighborhood for personal reasons. You would have developed emotional ties to your home. The same goes for having to leave an unhealthy relationship.

And sometimes this card comes up when you plan to go on a cruise or travel by water.

Astrologically, this card is linked to Mercury in Aquarius.