Moon And Nine Of Swords: Being Good At Hiding The Wounds Of Childhood Trauma 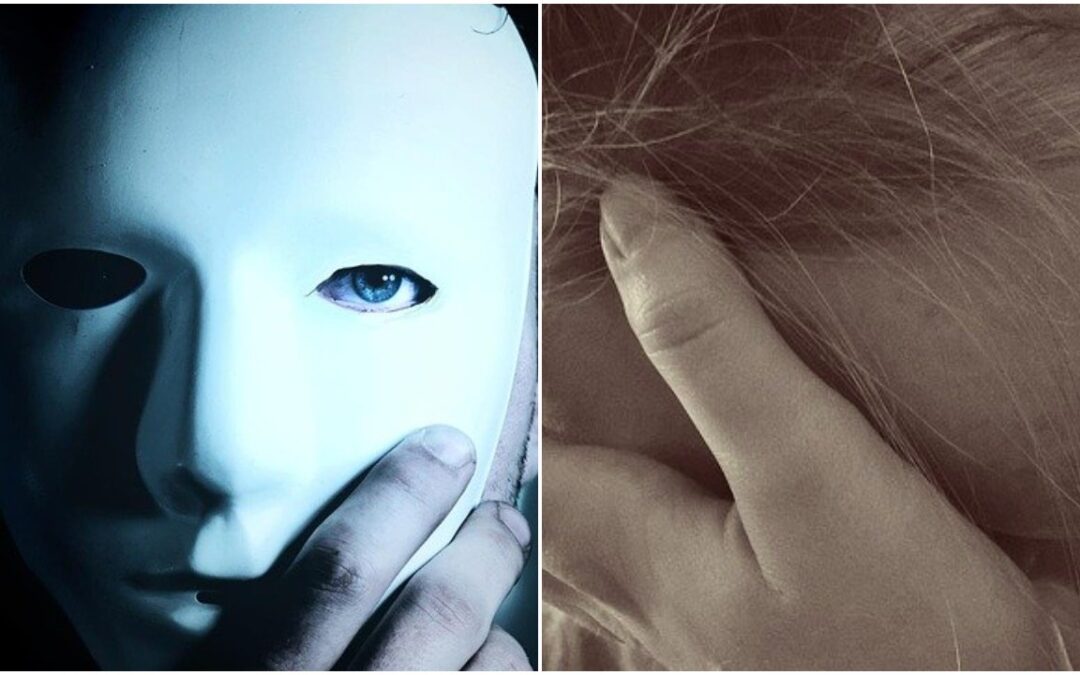 You look at a comedian, and you cannot imagine that they would ever have a dark and gruesome past. That is because they are so hilarious, positive, and they know how to make you laugh. On top of that, they seem so together because that same comedian has a successful business on the side. They have a loving family and wonderful kids. Not to mention, they seem so happy and together. But here is the thing. Are they really happy? Are they really all that together? Because I can promise you that, the comedian that appears to be successful, cheerful and entirely together is living a very different reality.

You don’t know about this comedian because they go home each night and keep putting on the facade for their family. But once they are asleep, the comedian cries each night, rocking back and forth, remembering the sexual abuse, the constant bullying, and the scapegoating they endured for all of those years. In addition to that, the one who supported them and kept them alive all of a sudden died. The comedian has no pillar like that and is going through the motions. However, they continue to fake it because they have to, as there is no choice to do it otherwise.

That is the perfect example of the Moon tarot card‘s combination and the Nine of Swords tarot cards (the Nine of Wind in the Penguin tarot). I can understand this because I have to put on a fake front while I am entrenched deep down with my trauma and sadness. However, when I am not in a professional setting, I am not precisely shy to show the world how damaged I am. Anyway, let’s talk more about the Moon and Nine of Swords tarot card combination.

Moon And Nine Of Swords Tarot Card Combination: Putting On A Facade To Hide Deep Wounds And Pain 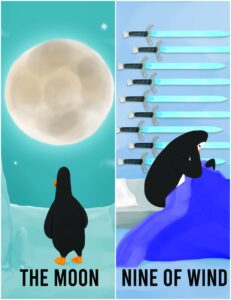 Let’s talk more about these tarot cards. The Moon in the Major Arcana can represent a facade, also an illusion. The Moon also keeps things hidden, and basically, it means to keep your head buried under the sand. The Nine of Swords tarot card in the Minor Arcana is about anxieties and pain keeping you up at night. That does not refer to physical pain. However, it represents mental distress. Think PTSD! When you combine those cards, you have someone who puts on a good and professional front, and they act as if they have it together, which the Moon represents. However, they hide the fact that they are dealing with hidden demons that keep them up at night, which the Nine of Swords represents. The Moon can also mean putting your head in the sand.

Think about the fact that you are dealing with constant abuse. You receive abuse by a partner or a parent, or both, but you are dissociating from the trauma. Therefore, you binge eat, or do drugs, or become addicted to gambling or shopping. You are hiding from the pain that the abusers inflict on you. You are damaging yourself by hiding from the ugly and uncomfortable feelings. And why would you want to sit through it and feel it? It is a terrible thing to feel and to acknowledge. That is because the sugar and fat or drugs numb the pain, and you have to keep numbing the pain, so you don’t feel it. What ends up waking you up? You either have a heart attack from the drugs or are so morbidly obese, or the abuser nearly physically kills you. That is what you call a Tower situation. The Tower is what will make the facade of the Moon crumble.

Okay, enough of that. Now, let’s talk about why people have to put on a facade to hide their hidden demons, traumatic pasts, and other mental illnesses?

Why Do Many People Hide Their Traumatic Pasts?

I am not a psychologist, so I cannot tell you from a professional standpoint. But from a personal perspective, I can. However, I will say this. According to Psychology Today, people want to hide their vulnerabilities due to a fear of judgment. How would it look to one of the most successful CEOs of a financial company, for example, if the world knew that his father sexually abused him on an ongoing basis and he battled a drinking problem to numb the pain? How would it look to others if it was known that he attempted suicide twice and suffers from Major Depressive Disorder, which resulted from the trauma he endured during his childhood? Think about it.

This CEO has all of the world’s admiration because he is organized but is charismatic. He has a wonderful family, and it would kill his reputation if everyone knew about his demons. And let’s talk about the fact that this man is nowhere near healed either as he suffers from painful memories each night. This man’s childhood trauma is a significant skeleton hiding in the closet, and he never wants it noticed.

I used to be like him. However, I was never successful as the man given in this example. However, I am a reader, and I felt like a giant hypocrite if I am here giving other people insight and advice on how to handle their hardships if I can barely get a hold of my demons. During the pandemic and lockdowns, I have had to stare at my childhood demons in the face, and I am struggling as my depression has taken a nosedive. I have Major Depressive Disorder, which was diagnosed years ago, and a mix of genetics and trauma may cause it. I am functional, but I am sick mentally. And I also think I have PTSD or even CPTSD, which hasn’t been diagnosed yet. I also feel like my mental illness has a parallel to the coronavirus: it mutated. I feel like depression is not my only problem. I suspect I have CPTSD, as I said, and perhaps I have been walking around with undiagnosed Borderline Personality Disorder since I check six of the nine points in the criteria (as you are likely to have it if you have more than five).

If you want to know about my sad story, here it is Five Of Cups, And Six Of Cups Reversed: Why Do So Many Intuitive Readers Have Traumatic Pasts? Make sure you have plenty of tissue on hand. It is a long, long country song. I was afraid to show how damaged and broken I really am because who would want to go to me for a reading if it was known? But I am to the point where I am breaking and cannot hold back on sharing the truth about myself. But here is a newsflash. Even most readers who seem to have it together struggle to heal from so much damage from their pasts.

However, if you happen to meet someone who seems to have their shit together, chances are they don’t. There is a big chance that they are fucked in the head because of the trauma they endured and are suffering in silence because of mental illness. They fear judgment, which unfortunately keeps adding to the stigma, so they suffer in silence as they protect their reputation. I did not want this to happen ten years ago, but I would rather have a reputation as an unstable basketcase than a fraud!