What Does Your Least Favorite Tarot Card Say About You? 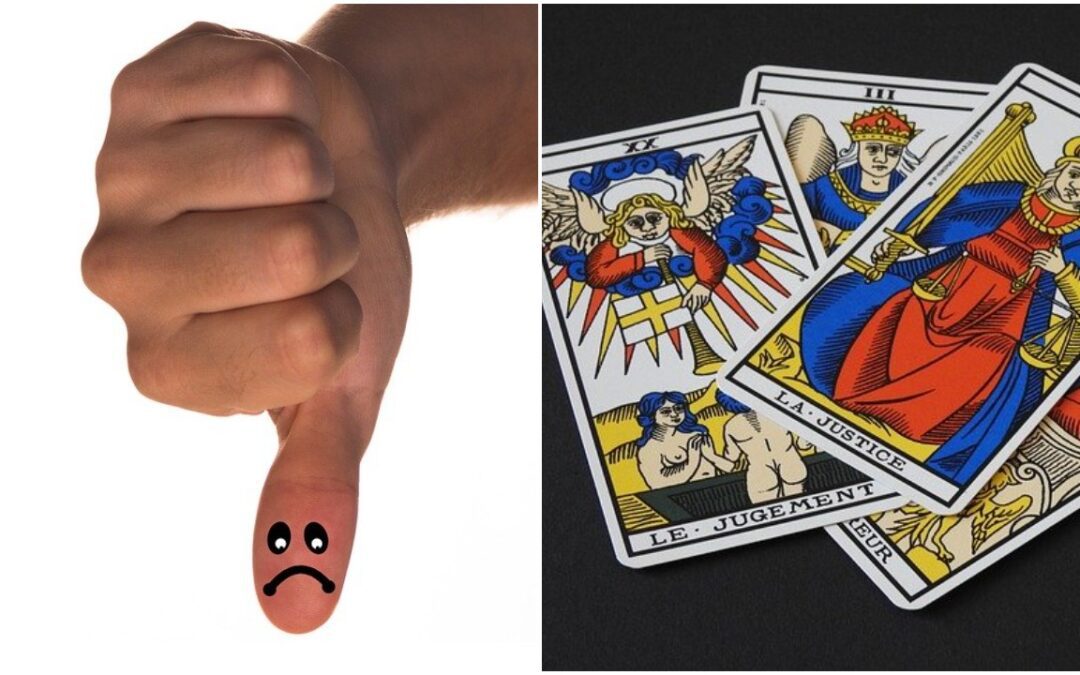 Everyone who studies tarot has a favorite card, which may not include one of the most known positive cards such as the Sun, the Star, the Nine of Cups, or the Four of Wands. People who study the tarot have their favorite card, and they have their reason for it. What about those who have a card that they cannot stand? Even if the card is one of the most positive cards in the deck! There is a reason that someone would feel so strongly against a card.

I want to talk about your least favorite card today because I found inspiration from another tarot reader who talked about that in her blog. And it got me thinking. I have to say this is not a topic that I thought about too much until I encountered the subject of having a tarot card that you dislike the most. That opposed tarot card does not have to be a ‘negative’ card such as the Three of Swords Tower. You may take a look at a card such as Judgement and feel pangs of anger, or you may look at the Three of Cups and want to strangle someone. Why? The reason for that is that there is something about those cards that trigger you. And that is the time to learn about why you are feeling that way.

The funny thing is I was talking about this subject with someone recently. I asked the woman what her least favorite card is, and she said the Nine of Cups. I was surprised by that answer and asked her what it was about the Nine of Cups that she did not like. This woman struggled with her weight for a long time, and she ate because she was bored and lacked a lot of good things in her life. However, once she decided to get her life in order and began looking at the good things in her life, she found it to lose weight and keep it off.

Therefore, when she sees the Nine of Cups, it reminds her of gluttony and eating food that she ate to soothe herself because of being unhappy. She did not see it as having blessings or even the wish card, which the card is known for being. She associates the Nine of Cups with takings things for granted and gluttony. I thought that was interesting since she felt that way.

The more I think about it, the one card that I do not like is Justice. Why? Because life is not fair. That is what I associate with Justice. Yes, it is a card that represents cause and effect and karma. However, how many times have I been hurt by those who got away with it? They didn’t pay for what they did to me? How many times did I do good deeds only to get crapped on? And you know the saying, why do bad things happen to good people? What about the drunk driver that killed an innocent family, and yet they not only lived but only had a few scrapes? To make it worse, they did not suffer the consequences as much as they should have suffered.

That is my issue with the Justice card. Life is not fair. I mean, if you want to look at things on a deeper level, perhaps the sadness and unfairness that kind people endure could be lessons they agreed to take on in this life. Okay, but that does not mean life is fair because it is not.

You may have more than one card that you dislike as well. I admit I don’t care for the Hierophant and Temperance cards all that much. I wouldn’t say I like conforming at all, which would explain how I feel about the Hierophant. And when it comes to Temperance, I am not a patient person as patience is not my virtue! So there it is. However, I have not examined why I dislike those cards as I have with Justice. Perhaps I should take the time to look into why those cards bother me, though I dislike Justice more than those cards. You will want to do the same thing when it comes to a tarot card that you like the least.

Here is an exercise. Take a card from your deck and take a journal, and write down what you dislike about the card. Is it the images of the card projects? Is it what the card itself represents? Ask yourself why that tarot card bothers you so much, and write down anything that comes to your mind. What feelings do you have when you look at the card? Note them. You will find a few answers, and this is just an exciting way to get to know yourself more by doing this exercise.

You may find surprising things about the card that you strongly dislike as well. The card that gets under your skin can potentially remind you of someone who you dislike. For instance, if you strongly dislike the most positive card in the deck, which is the Sun, that may be a case where the Sun reminds you of someone who you know that gets under your skin.

Perhaps that individual is too positive and too chipper, and overly optimistic. Maybe that individual threw toxic positivity at you. That would explain why you would not like the Sun. That would make a lot of sense. Then again, there may be other reasons why you would not like the Sun. Maybe it has nothing to do with someone who you dislike. It could not have anything to do with anyone except for something within you that the Sun rubs the wrong way. You may see the Sun as the toxic positivity card in itself. When you are in the depths of grief and despair, the last thing you is to be told to cheer up as it is critical to process negative feelings and heavy emotions such as grief. That is something I can completely understand.

On the flip side, you may strongly dislike a positive card, but you may love a heavy card that has a negative connotation to it. Why would that be?

Why Do You Dislike Some Tarot Cards But Love Others?

I have personally heard people say to me that they love the Tower and Death cards. And some people have said that they thought fondly of the 10 of Swords. Why did they feel that way? The Tower has a negative connotation as it is the card that represents destruction. However, what is the thing that the Tower destroys? It destroys anything that no longer serves you or something destructive to your wellbeing. That can be the very thing that people need.

I have heard people say they think of the Death card fondly because it represents things coming to an end and significant transformations that some people are ready to have. It is not hard to see why someone who is in a bad relationship would think fondly of the 10 of Swords. That would be a card you would welcome to visit.

Suppose you dislike a positive connotation card and don’t know why it; explore that. On the flip side, if you like a tarot card with a negative connotation, you relate to that card for some reason. That may be a fascinating exercise. Go through each of the 78 cards and explore your feelings about each of them that pop up.