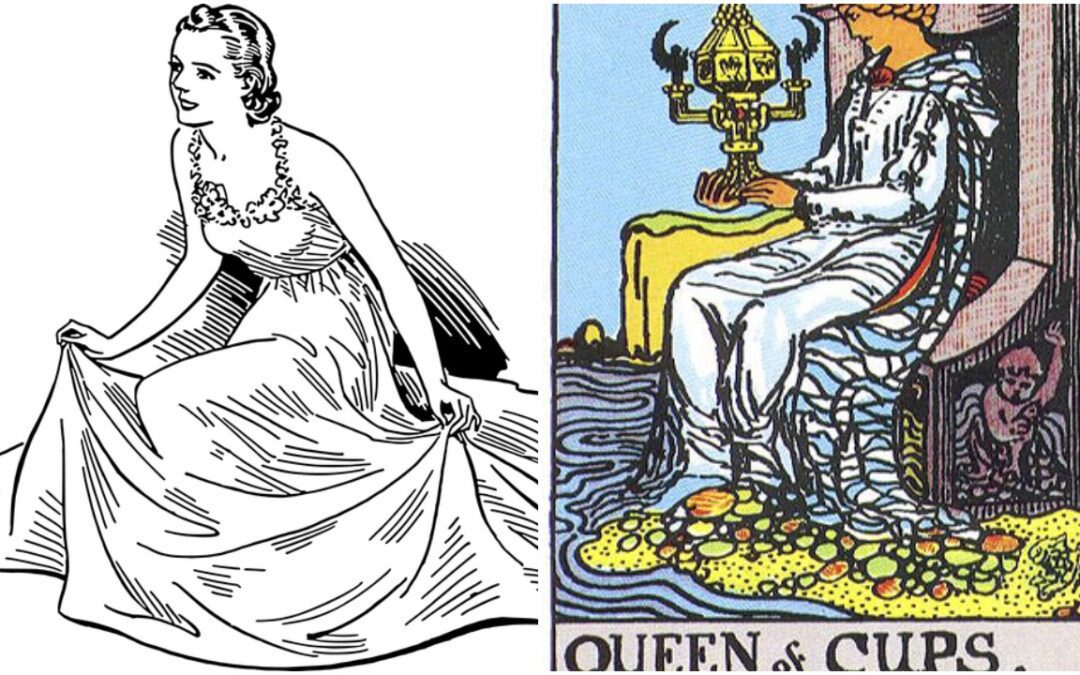 You already know how the Major Arcana of the tarot can depict characters you create in your stories, whether you plan to write a novel or a nonfiction piece. You also know that you will want to add ‘flavor’ to the characters’ personalities that you create since people are complex, it makes sense to add different facets to someone’s main personality. For instance, you have someone who is nurturing and caring who represents the Empress. However, she can also have a sneaky and dishonest side, depicted by the Seven of Swords tarot card.

Now, let’s talk about the suit for someone who has an emotional side represented by the Minor Arcana Cups suit. The Cups is associated with the water element and represents healing, intuition, feelings, relationships, and every aspect of emotions. Let’s now go over each of the cards in the Cups suit and learn about how they can add some spice to any personality depicted by the Major Arcana in your creative piece.

The Ace of Cups is about falling in love with a person, an item, a hobby, or even an idea. Therefore, you would associate compassion with this card, and when you think of someone who has this personality, they have a strong, compassionate side despite what the main personality shows. They can fall in love easily and get wrapped up in their feelings over something new.

The Two of Cups is about mutual attraction and unified love. Therefore, if you like someone, they will like you back. This one is quite easy as you can create a character who is charismatic and likable. It does not mean that anyone who comes across this character will want to befriend them or go into a relationship with them, but they will definitely like them.

The Three of Cups is about creating something with others, celebrating with others, and even a new family. You can imagine someone who is sociable, and they are thinking of having a party with you often and other friends. The individual with this type of personality loves to have a good time with other people, but you can say it has a strong creative side. This individual does not like to be alone.

The Four of Cups represents apathy, saying ‘no’ to opportunities, boredom, meditation, and contemplation. You can imagine a character representing this personality trait as the emo type, as they’d be quite moody and would pass down good opportunities because they don’t think they deserve it or would find some excuse. This type tends to brood but quietly and away from others. This individual is not sociable.

The Five of Cups is all about disappointment, pessimism, regret, and focusing on losses and failures. You can imagine someone who has this personality type as being the one to wallow in self-pity and to focus on losses and focus on regrets, and they pessimistic. This individual does a lot of ruminating.

The Six of Cups is about reminiscing, nostalgia, joy, innocence, and childhood memories. Someone who represents this card is very childlike and is very connected to their inner child.  You can say about them, and perhaps they have a very youthful appearance if you don’t want to add an aspect of their personality as childlike. Or, maybe they like something that you did during your childhood.

The Seven of Cups is all about having too many options presented to you at once and struggling to make a choice. It can also represent shiny object syndrome, information overload, and an opportunity that looks good to be true must be just that! Therefore, it is not hard to imagine how to represent a personality type that matches this card. This individual falls prey to scams and good-looking opportunities as they cannot stick to one thing. The individual is very scattered and is not the type to make up their minds. They take too much on at once and end up accomplishing nothing as a result.

The Eight of Cups is all about leaving something that is no longer fulfilling even though it is difficult to do. However, sometimes walking away from a difficult situation is the only way to move on, no matter how emotionally hard. You can imagine a character who has no qualms about cutting someone out of their lives, or they will ghost them, but that also means while they make such a difficult decision, it is tough for them to do it. Imagine the character ghosting someone because they are toxic even though they have feelings for them, and cry about making such a hard decision to ghost them. That is the type of person they are.

The Nine of Cups is the wish card. That is the card that comes up when you are told you will get what you wish for or simply content with what you have. The Nine of Cups is also associated with feasts, so, therefore, you can imagine someone who has a love for throwing a big party involving feasts for any reason, big or small. You may even think of someone who you associate this card with as lucky. Maybe they play the lottery and enter other contests and constantly win. They have a mindset of winning, and even if they don’t win, they don’t get down about it. They know they tried, and when they do win, they throw a feast!

The Ten of Cups is a happy family and represents fun events happening for families. Therefore, you can imagine someone who associates with this card as very family-oriented. They are there to support their families no matter what, and their lives are all about family. Maybe they like to organize family reunions and family events, and that means a lot to them.

The Page of Cups represents a curious mind, receiving intuitive messages, or seeing creative opportunities around you. Therefore, you can see this card as someone with intense curiosity or creativity. You can certainly add those traits to any personality. A court card can represent a personality as a whole.

The Knight of Cups is the one who is in tune with their intuition, and knows how to utilize their creativity to attract someone, and has a charming nature. You can create a personality who has these traits, and since this is a court card, you can create a character who represents the nature of this card as a whole.

The Queen of Cups is nurturing, compassionate, supportive, and is a good listener, and will do what is possible to support you. You can create a character who has these traits, or you can use this card to represent the entire character themselves since this is a court card.

The King of Cups is emotionally mature and will not allow their feelings to get into the way of dealing with adversity. They are the master of their emotions, and since this is a court card, you can create a character who has these traits or represents the entire personality.

You probably get the idea by now of how to create a character depicted by Major Arcana by using a Minor Arcana card to give them a personality trait. Therefore, you may decide to use the Tower to describe a character that you create as a biker who has an unpredictable temper. However, the trait that you added is one from the Ten of Cups, which means he loves and cherishes his family despite that. The last suit that I will cover is the Pentacle suit next week!