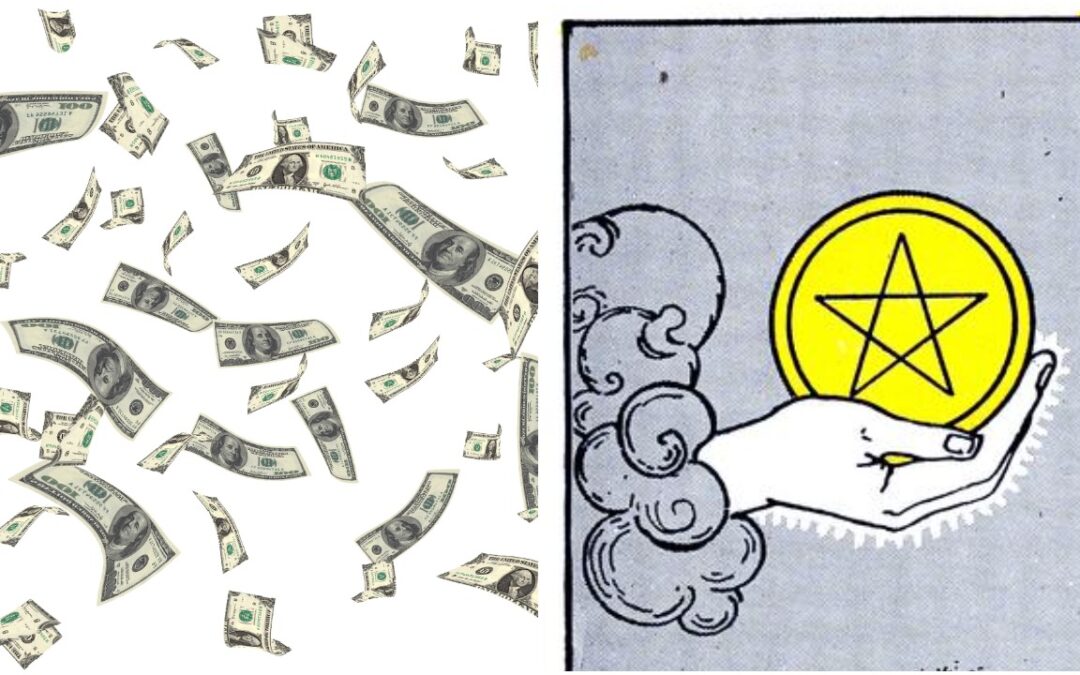 When you plan for your writing piece, you know that your novel or nonfiction characters can associate with a card of the Major Arcana of the tarot. However, the cards are not ideal for depicting a whole personality other than the court cards for the Minor Arcana. You can flavor the character by using cards from the Minor Arcana. I have already covered how the cards from the Wands, Swords, and Cups suits can spice up a personality depicted from a card from the Major Arcana. The last suit I will cover is the Pentacle suit.

The Pentacles suit in the Minor Arcana is the one that rules finances, physical or material relations, which involves your health or possessions, and the association is the earth element. How can the Pentacle cards influence your characters depicted by the cards of the Major Arcana? Let’s find out, starting with the Ace of Pentacles.

The Ace of Pentacles is all about manifesting something new and setting an intention to create abundance. You can imagine someone who has it in them to know how to manifest something they want because they have the practical sense to do so in addition to being ambitious.

The Two of Pentacles is about managing priorities and juggling them. Therefore, you can think of someone who is naturally organized and can juggle work, home, and maintaining good habits. Maybe this individual is good at multitasking, and they have an innate ability to multitask when they should be in chaos – but find a way to manage it.

The Four of Pentacles is about saving money, frugal living, and it may represent being cheap depending on the spread. It is safe to say that a character depicted with this card would not be too keen on spending money. You can create them as being cheapskates or just the type to live frugally.

The Five of Pentacles represents financial loss, ill health, debt, and unexpected expenses. It can also mean poverty. Therefore, you can create the character as poor or make them unable to spend money. Consequently, they end up accumulating debt over and over again. Thus, someone who has poor spending habits always ends up broke.

The Six of Pentacles represents giving and receiving wealth or being charitable, but it also means being the recipient of a charitable cause. You can add a character who has been helped by charities or is the generous and giving type. That is relatively easy to do when it comes to adding a trait of any character.

The Seven of Pentacles is all about slow but steady growth that will manifest into something. Therefore, it is a card representing making an investment, building something slow but knowing it will pay off in the future. This is why this card often means pregnancy, like a slow-growing baby that starts from an embryo and develops into a newborn baby over nine months (or less). Someone who represents this card would be very patient and believe that something they begin will pay off later. Perhaps the individual is good when making investments and knowing that their investments will pay off.

The Eight of Pentacles rules apprenticeship as you gain new skills in a new career or job or doing repetitive work. Someone who has this trait can always have the desire to learn new skills or prefer repetitive work. Therefore, the things that would be boring to most people, such as doing assembly-line work, would be preferable to the character you plan to include in your writing piece.

The Nine of Pentacles is the card that represents abundance, financial independence, as well as luxury. Therefore, you can depict a hard worker who succeeded with their business or career and reaps their financial rewards. They may be the show-off type, or they may not. However, they could be the type to live in a large home and have an expensive car. Maybe they have plenty of jewelry. You get the idea.

The Ten of Pentacles is all about true wealth and a contributing member of society. The Nine of Pentacles shows how you earned your wealth, but the Ten of Pentacles indicates that the wealth is here to stay for the long term. Therefore, you can have a character who made it big years ago and is still highly successful with their work. Perhaps they can be the type that has always been very ambitious. They knew how to manifest what they wanted and did it successfully.

The Queen of Pentacles is a working parent, and that is the way to depict the character – as the working parent who brings home the bacon and does the nurturing whether it is the mother or the father.

The King of Pentacles is a good leader and wealthy and one that represents security and discipline. You can imagine the nurturing father figure as well, which you can create a character that depicts that personality. A wealthy, practical, and secure leader is the one that this card means.

There you go, this represents how the Pentacle suit can spice up a character’s persona represented by a card in the Major Arcana. For instance, you can create the Hermit as someone who keeps away from others but has a trait representing the Six of Pentacles. You would imagine someone who keeps to themselves but has a heavy charitable side, and you could imagine the Aquarius with that image.