The Moon And Eight Of Swords: Gaslighting 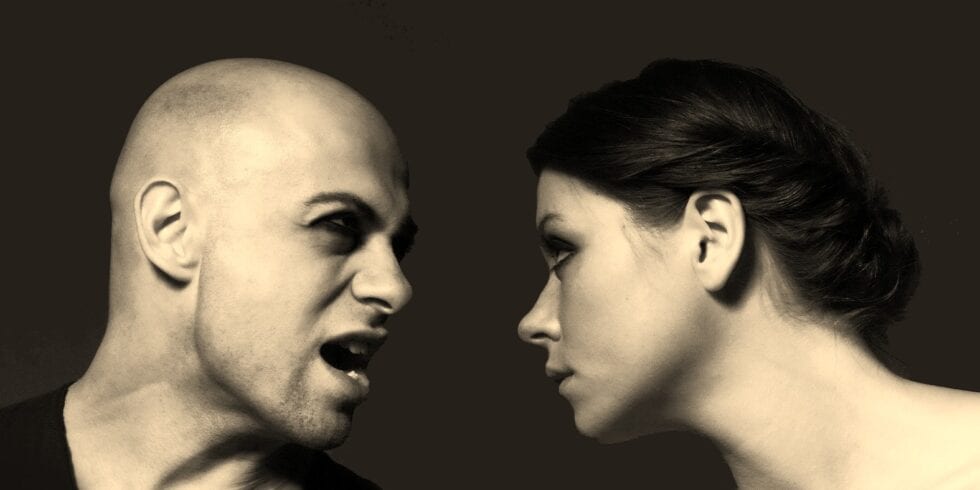 Whether it is a romantic one or a friendship that isn’t making you happy, you are in a relationship. That is because you know that the individual is toxic, but at the same time, there is something about them that you like. Even though you know that the relationship is toxic, you also gain something from it. That is why you would not want to leave it; however, it becomes a problem when the individual causes you to question your memory, sanity, and even identity.  Why would the individual cause you to question these things about yourself? Perhaps they are gaslighting you.

You have heard the term gaslighting, but you don’t know what it means. Any unhealthy relationship is subject to gaslighting, which is a form of emotional abuse. When one party is dominant or abusive, this tactic is often used. The dominant one likes to control the vulnerable one. That can be considered abuse as well, on some level. If not, such a relationship is unhealthy.

Gaslighting is a form of manipulation where you question your sanity, memories, and thoughts. There is nothing healthy about your relationship, for instance. Days ago, your other half said they would go to the grocery store to pick up some strawberries. Because they were going to take care of that, you did not get any strawberries when you went grocery shopping. You didn’t have to do that.

As soon as you returned from the supermarket, your other half grabbed your bags and asked where the strawberries were. You told them that you did not receive them and reminded them that they had said they would take care of it. They said to you that they never said that and that you imagined things. They accuse you of being irresponsible. You remember that they told you they would get the strawberries. However, not long after the event, you start to wonder whether or not you imagine things. That right there is an example of gaslighting.

When you look at the tarot cards, you will see a combination of two cards that represent gaslighting. You take the Moon and the Eight of Swords. The Moon is about confusion, deception, illusions, and keeping things hidden. The Eight of Swords is imprisonment of the mind. When you see this combination, you will see that someone is playing with your mind and causing you to question yourself – you feel trapped at the same time.

The Moon And The Eight Of Swords Tarot Combination: Someone Is Gaslighting You 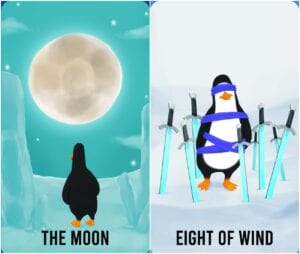 When you add the Moon, which is all about confusion, illusions, deception, and keeping things hidden, and the Eight of Swords (Eight of Wind in the Penguin tarot), that is a perfect combination for gaslighting. You have a friend, a family member, or an abusive partner and deliberately creates confusion for you. The Eight of Swords represents you feeling trapped in your mind, as you feel you are losing your memory, your sanity, your identity, and your mind.

For instance, when it comes to narcissism, you hear instances of gaslighting. Narcissists are known to gaslight their victims. The relationship between mentally ill people and those who want to take advantage of them can often lead to their victimization, especially if they have a mental illness. That does not necessarily mean that a relationship is abusive consistently. Unfortunately, it’s not healthy once again.

Here is an example of a situation like this. One of my ex-friends has schizophrenia. When she was vulnerable, her husband gaslighted her. She was going through a rough time, and he didn’t like me. It was the perfect opportunity for him to feed her lies about what I had allegedly done to her, which I had never done. As a result of establishing my freelancing business while caring for my kids, including one with special needs, I didn’t give her the attention she wanted. I couldn’t give her special treatment, and she couldn’t handle it.

That’s why she did the unthinkable thing to me to the point where I had to call the cops. Even though I will never accept her back into my life, I blame him a lot more than I blame her because he gaslighted her while she was in a vulnerable state. However, she is by no means blameless. A person who uses their mental illness to justify terrible acts does not deserve to get off the hook. If you are in a relationship with a narcissist or a situation like my ex-friend, you should learn the five signs of gaslighting.

There Is A Greater Sense Of Anxiety And Self-Doubt

You become less confident and more anxious the more your partner gaslights you. There is a lot less confidence in you. In particular, if you believe that you are losing your mind because the person manipulating you makes you think that. As a result, you are more afraid to do things. If you have struggled with self-confidence in the past, you may lose all faith in yourself.

Feeling Like You’re Different From Who You Once Were

Once upon a time, you were more confident and trusted your memory and sanity (even if you considered yourself half-sane, as many of us do). Imagine, however, that you constantly question your mind, memory, and everything else about yourself. It’s all because of the gaslighting, of course. In that case, you are not going to feel like the individual you were before. That is very troubling.

Whenever you are subjected to gaslighting, you will be made to feel as though you are doing everything wrong. That leads to your apologizing. You will apologize to those you have never hurt a single time. If you are sorry for something that was not even your fault, you will say so. You may even feel responsible for many of the world’s problems.

It’s Hard For You To Make Decisions

If you struggled with making decisions in the past before hooking up with the manipulator, then you will have to work even harder to make decisions after experiencing gaslighting. After dealing with emotional abuse, you won’t make decisions or know what you want anymore. You can’t make decisions on your own because you are not confident enough to believe that you can make the right decision.

You no longer have enjoyable and stimulating hobbies. You don’t like seeing your friends and family as much as you used to. Instead, you isolate yourself. In addition, you may be depressed, hopeless, and even apathetic. Depression is like that.

If you are with a gaslighting partner, had a gaslighting parent, friend, or any other person you have had to deal with consistently, it is time to realize that you are not going crazy and that there is nothing wrong with you. You are emotionally abused and manipulated callously. After that, it’s time to go no contact and start rebuilding yourself.