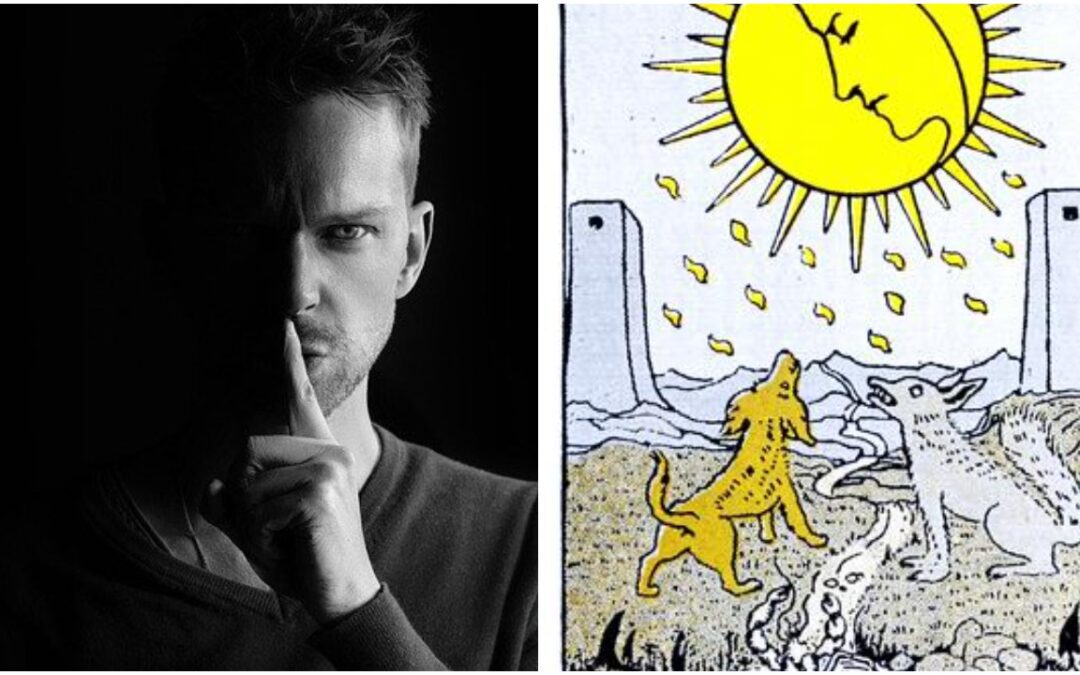 I am not an expert on narcissism by any means, but I have been affected by narcissistic behaviors from others like most people. However, I have learned a lot about Narcissistic Personality Disorder from a certified life coach named Angie Atkinson, specializing in Narcissistic Abuse Recovery Support. Her site Queenbeeing is rich with information about the complex disorder. Many people throw the word narcissism ad nauseam whenever they don’t like someone. They call them narcissistic. In some cases, it may be true that those who upset others are narcissistic. However, anyone can also have days where they can be jerks, and that alone does not make them narcissistic. Especially if they realize they were wrong for hurting you and apologize for it sincerely.

You also have to remember, everyone has narcissistic traits as it is a spectrum. And you have to have some of those traits to preserve yourself and find a reason to be proud of your accomplishments. That is a healthy degree of narcissism, which is not what I am talking about. I am talking about someone who is pathologically narcissistic.

That is because someone who is pathologically narcissistic does not have any emotional or compassionate empathy, unlike the average individual with healthy degrees of narcissism. They are unable to love or care for anyone truly. They only care about what they want and need and will get it at the expense of others. The stuff they need from others is known as narcissistic supply. They are known to be abusive and cruel because they get a rise out of others’ suffering as well, which adds to their supply.

Narcissists also have the reputation of driving around in fancy cars, having a flawless image, and living in large homes. You think they would all brag about their achievements and how much money they have, and how perfect their kids are. Many narcissists do fit that bill as those are the grandiose or overt narcissists. However, not all narcissists are like that. Some appear to be quite humble and make themselves appear vulnerable and altruistic. Those are the covert or closet narcissists. However, once you get to know them, you see they are just as narcissistic and abusive as their grandiose counterparts. The reality is that all narcissists are incredibly insecure and contain no confidence even though they make the appearance that they do, overt, or covert.

Some narcissists are worse than others, and the worst types are the malignant ones. The malignant narcissists can do a lot of damage. How do you deal with a narcissist? According to Angie Atkinson, the best thing to do is to go no contact if you can. However, in some cases, that is not always possible. If you have a narcissistic parent and cannot afford to live on your own, or you are co-parenting with a narcissistic ex, you can find methods to handle them and keep contact low. Now, let’s go over seven tarot cards that can represent narcissism or aspects of the condition. 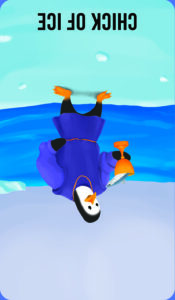 The Page of Cups reversed represents narcissistic behavior. That is someone who is extremely immature and throws tantrums because they are unable to handle hardship emotionally. Narcissists throw tantrums and get angry if things don’t go their way. That can be as simple as you telling them that you need to take care of yourself. They can’t understand that you need to invest in some self-care and self-preservation. They see that as a threat to the supply you provide them.

The one thing about those who are truly narcissistic is that they stopped developing emotionally in early childhood. That is why they cannot be empathic and understand the needs of others and only focus on their own needs and wants. That is why narcissists are incredibly immature, as they don’t know how to manage their emotions. 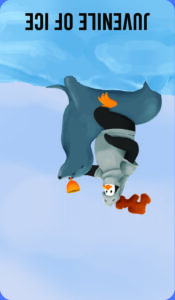 The Knight of Cups upright is a hopeless romantic. However, when the card is in reverse, you have someone who is also romantic as the narcissist always appears that way at first when they love-bomb you. Typically when a narcissist reels you into their trap, they make it sound like you are their dream partner. You will believe that they are your soulmate. They magically love the things that you love and don’t like the things that you dislike. That sounds like Heaven. Wrong. Because the Knight of Cups reversed has another agenda going on.

In reality, the reversed Knight of Cups is also incredibly envious, which narcissists are due to their insecurities. They have extreme mood swings and throw tantrums as well. They are also melancholic and will not hesitate to appear that they are victims and need your sympathy and attention, a rich source of narcissistic supply. You can see how this is a fitting card to narcissism. 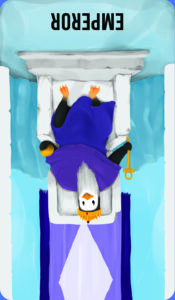 The Emperor upright is a good leader and someone who is very self-disciplined. That type is the type to create order and is a respected leader. The Emperor is not the type to become abusive in regards to power. However, the Emperor in reverse will do that. The reversed Emperor is known to be manipulative, but this a card that represents immaturity and the inability to maintain order and discipline. That is the definition of a control freak, which this card in this position represents.

The Emperor reversed is an immature manipulative control freak who will abuse their power and throw you under the bus by getting what they want – just like a typical narcissist would.

The Seven of Swords is the card that represents trickery, manipulation, and deceit, and that is what the narcissist dishes out at you. They are never honest, as narcissists are known to lie, cheat, and do what they need to do to get their supply from you or another source.

Even when you think of a narcissist love-bombing you when they first are trying to reel you into their trap, they will shower you with gifts and tell you the things that they know you want to hear. That is the narcissist manipulating you into believing that they really are your soulmate. The narcissist manipulates you into thinking that they are someone who dropped down from heaven to serve you and shower you with love and affection. When reality starts to hit when they devalue you, you see the narcissist was manipulating you to fall into their trap. That is the perfect example of how the Seven of Swords plays out.

The Three of Swords is the heartbreak card. That is the card that also presents sorrow and depression. You can also see the card as representative of harsh and cutting words. Narcissists are known to throw cutting insults at you that will shake you to your core. They will even throw the thing you are grieving for into your face if they are enraged, such as you grieving over a loved one who passed away.

This card fits with narcissism because narcissists will often discard you at the worst possible times. They will discard you when you find out you have an illness, or if you had just lost a loved one, or even right before a time of celebration such as a wedding anniversary. They do it to abandon you at the worst possible time of need. They don’t have emotional or compassionate empathy, but they watch and learn how that type of empathy works. They learn quickly what will deepen your emotional wounds, and they will act on it whenever they want. 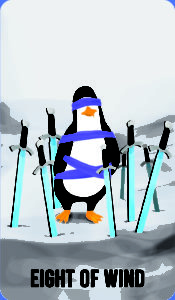 The Eight of Swords represents the feeling and believing you are trapped. However, that does not just apply to how you feel about the narcissist. That is how the narcissist feels within. They project a false image that keeps them far away from how they are genuinely feeling. They lack emotional and compassionate empathy, but that does not make their feelings about themselves invalid.

The narcissist puts on a false self as they feel trapped within because they are so deeply insecure and unhappy. They will do whatever they can to avoid introspection. However, at the same time, their refusal to look within keeps them in this imaginary trap. They hurt themselves along with hurting those around them.

The Moon represents your shadows, fears, and anything that’s hidden. You can also say that the Moon represents something fake. Narcissists are extremely fake as they project a false self, which means their true selves remain hidden, and they make sure it stays hidden. The arrogant, grandiose narcissist, who bragged about his brand new car and all of the chicks he attracts, is hiding something very sinister. The sinister thing he is hiding include his extremely low-self esteem, his failures, his profound insecurities. He is very fearful deep down, but he stays away from that.

You can apply the Moon to the covert narcissist as well. On the surface, you would never see them as narcissistic as they make themselves known as vulnerable, humble, and altruistic, but deep down, there is something very sinister about them.

If you have had to deal with a narcissist in your life or someone with strong narcissistic traits, you would see how these tarot cards would relate. Once again, I am no expert on narcissism. Still, I am learning a lot about the condition. I truly feel for anyone who has had to deal with narcissistic family members, parents, partners, co-workers, friends, and anyone else!