The Major Arcana of the Tarot – Emperor 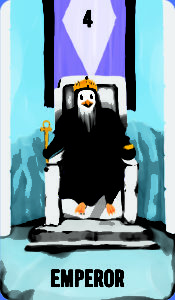 The Emperor is the most masculine card in the set as it represents authority, discipline, order, stability, and self-control. When this card shows up in a reading, it is suggestive that your life is in order and you are the one who is in charge as this is what you need to see at times in order to gain some confidence. This also can be indicative of great accomplishments that resulted from being so disciplined as well as hard-working.

The Emperor also makes it clear that you are the one who is setting up your own rules as well as your own boundaries. This is the card that rules leadership as well which is suggestive that you are in this role and position. You are more powerful than you realize, and organized. If you are not at this point, then it is a reminder that the potential is there.

Going back to the freshman example, the Emperor represents the freshman realizing that he has a lot of homework to do and there are expectations of him placed. High school is a different world than elementary school as extra expectations are placed. He needs to be self-disciplined and hard-working to succeed. If he working in group projects, he may have to take on the role of the leader at times so that everyone is doing their part.

If the Emperor comes up in reverse, then it means that there is a lack of self-control and discipline. It can also represent immaturity or being manipulative. It is a sign of a control freak. It may also represent a loss of authority. 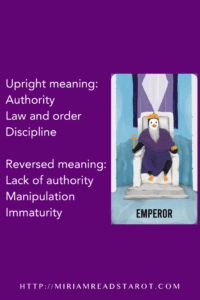 Astrologically this card is tied to Aries and is assigned the number 4 as it is the fourth card in the Major Arcana. The Enneagram type that is tied to the Emperor is type 8.