What Are The Five Main Differences Between Tarot And Lenormand? 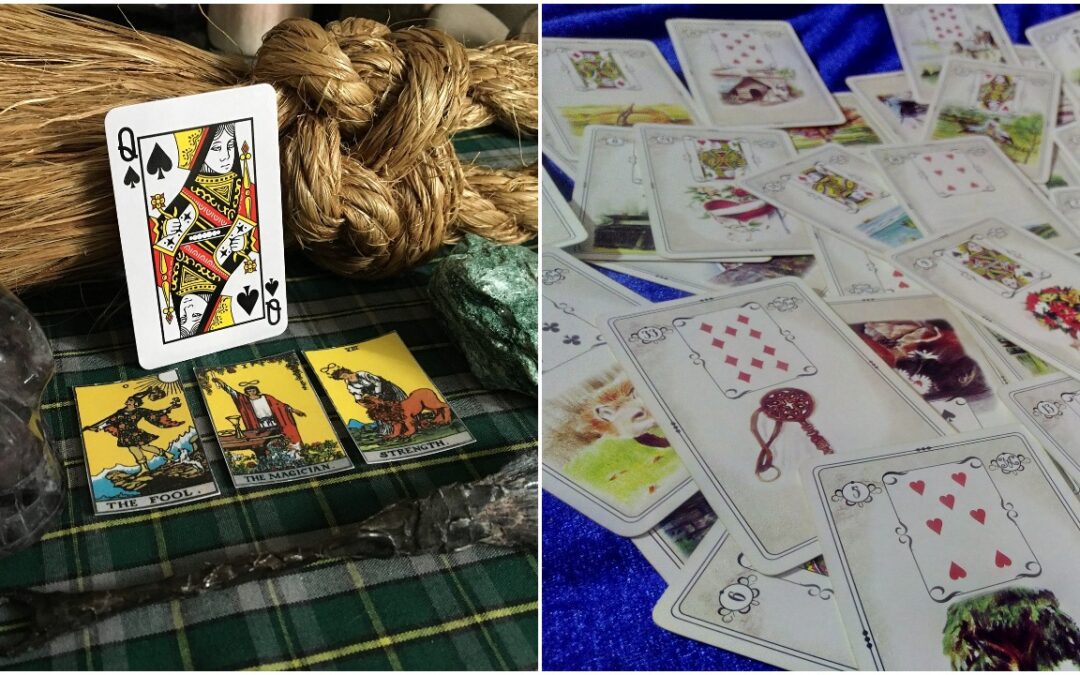 The general public might have the impression that tarot and Lenormand cards are the same things. But here are the facts: tarot and Lenormand are two very different sets of cards. Let’s go over the five fundamental differences between the two cards right now:

Tarot decks contain 78 cards, and Lenormand decks feature 36 cards, making the two types of card decks different. Therefore, the Lenormand cards are a lot more portable than tarot cards because of the decks’ size. You can easily take Lenormand cards along with you without the deck taking up much space in your purse or bag. That is what makes carrying around standard size tarot decks tricker due to their bulkiness. However, you have options to find smaller tarot decks for that purpose.

Tarot Cards Has Suits Unlike The Lenormand Deck

Tarot cards that have been around since the 15th century contain both the Major and Minor Arcana. The Major Arcana has 22 cards representing significant life events and themes, and the remaining 56 cards in 4 suits (cups, swords, pentacles, and wands) represent more of the mundane. Included are ten pip and four court cards that have numerological, astrological, and Kabbalistic correspondences.

Lenormand cards have correspondences to playing cards early on, but they don’t have any suits and are not structured that way. That alone is a significant difference between both of the decks of cards.

Tarot Cards Have Reversals And Lenormand Cards Do Not

Whenever a reversal in the tarot comes up, it often can represent a delay or some form of negativity, but not always. For instance, the Devil reversed represents a positive meaning that means breaking free. However, with Lenormand cards, there are no reversals and can have both positive or negative representation. For instance, the Anchor card can have the meaning of resilience and stability, which are positive traits of the card. However, it can also indicate an inability to move forward because of being too stuck. That, of course, depends on the context of the reading.

The Tarot Is Spiritual And Psychological Whereas Lenormand Is Practical

The tarot appeals to readers who are more spiritual and who enjoy making astrological and numerological correspondences to all aspects of life. In other words, they enjoy digging deep into the spiritual meanings of anything. Tarot can help anyone be self-reflective and support when it comes to brainstorming ideas for writing or blogging.

However, the Lenormand does not do any of that. Instead, it provides a reader with practical solutions that can help fix up or solve issues. It would be understandable that those who don’t want to look deep into why things happen would want to use Lenormand cards instead of the tarot. Lenormand helps them face situations logically.

Both sets of cards stimulate intuition and psychic powers. However, they do so in different ways. The tarot encourages the clairvoyant and visual side, and they are suitable for meditation and spiritual self-growth. Tarot helps when it comes to creating collective unconscious connections. The Lenormand, however, is different as it does not dig into your profoundly spiritual side. It triggers the language area of your brain instead.

The cards feature symbols and keywords that will provide images that can be formed into a sentence when they are strung together. Therefore, the Lenormand cards bring out messages from an external source, whereas the tarot brings messages from an inner source.

Both sets of cards can be used by readers, as was mentioned previously. That also depends on the individual reader based on their preferences. However, they can be used for confirmation as well. If a tarot reading brings out an esoteric message, for one thing, and a Lenormand reading brings out the same result, but in a logical and non-esoteric way, then you know what is going on. And you can find the tools to find a solution. That is why it may pay to learn the Lenormand and the tarot.